The following is an excerpt from "The Complete Guide to Airedale Terriers" by Andrea Berman. For more information visit the books Amazon Page.

Some dogs are easier to train than others. They just “get it.” For instance, I’m convinced that my little rescue dog, who came from down south in Georgia, was born an “old soul.” She was 4 months old when we adopted her, never needed any formal training, responded to commands immediately, and walks perfectly both on and off leash.

My Airedale Murphy, however, spent an inordinate amount of time in dog obedience school. I’ve calculated that it was the equivalent of receiving her master’s degree from Harvard—from the perspective of time as well as money. It wasn’t because she was dumb. Quite the opposite. She was an Airedale—sweet, stubborn, and extremely smart. She was a champion at pushing our buttons and testing to see how far she could go before we’d notice her mischief du jour. I remember one particular day, when we arrived home to find her sitting on top of the dining room table with a banana in front of her. Said banana had previously been located on the kitchen counter, which we were certain was out of her reach. Upon further inspection, we noticed that the inside of the banana had been eaten, while the banana peel had been carefully put back in place, so we wouldn’t notice the misdemeanor. Murphy was off to the dog trainer quicker than you can say, “We need help!” 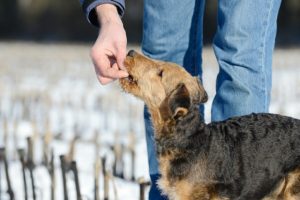 Please don’t assume that dog obedience trainers should be called in as a last resort. Far from it. Sooner, rather than later, is the best time to start training your dog. It’s obvious that trainers specialize in training. But that doesn’t necessarily mean their practices are limited to working with dogs with severe behavioral problems. Some trainers specialize in working with puppies, geriatric dogs, or dogs with special needs. Others specialize in working with families, basic commands, aggression issues, off-leash work, or dog socialization skills, to name but a few. A good, professional trainer is committed to working not ONLY with the dog, but with the dog’s owner(s) and all members of the household as well.

Working on your own without a trainer is another option, but it’s up to you to educate yourself on the best teaching methods, and understand how your dog responds. Some dogs need only a gentle suggestion, while others need a bit firmer approach. In any case, your ultimate goal is a well-mannered dog. And let us not limit your Airedale’s training to commands. Just as every human needs mental stimulation, problem-solving challenges, and physical exercise, your new dog requires these things as well. But let’s start with the commands for now.

Dogs are pack animals. They travel with their pack, eat and sleep with their pack, play with their pack members. YOU are the leader of their pack now. Your dog looks to you for nourishment, guidance, affection, entertainment, security. Do not let him down. He will constantly question whether you are worthy of the title of “Top Dog” and will test (probably over and over again) to see if you’re actually in charge. If he sees that there’s a deficiency here, he’ll be happy to step up to the plate and take over as Chief. It’s up to you to convince him that you are, indeed, Alpha Dog. In the canine world, Mother Dog does not yell, fight, cry, or lose control when one of her offspring becomes unruly. She is the authority figure, lets her displeasure be known with a quiet but very effective growl, and her young hooligan immediately realizes that he’d better shape up. If you want to earn your dog’s respect, you’ll need to become Mother Dog.

As a professional dog trainer, my favorite method of getting my point across to new dog parents boiled down to these two words: Benevolent Dictator. You are in charge, you are to be respected, and you rule with dignity, compassion, and gentle guidance. BUT with all that said, you’re not putting up with any shenanigans from your furry child. As Benevolent Dictator, Top Dog, Big Dog, Alpha Dog, Mother Dog, Daddy Dog (whichever crown you prefer to wear), you’re there to help your new pooch make good choices when it comes to her manners. When she can comprehend that what she’s doing (a) pleases you and (b) gets her a treat, praise, or a reward for good behavior, she’ll make every effort to comply. After all, when Big Dog is happy, everybody’s happy.

Welcome to Basic Training—Class Is Now in Session

You may have already decided that you’d prefer not to train your dog yourself, and instead enroll him in a dog obedience class. Perfect. Whatever works for you, your family members, and your dog. Or you may have decided to DIY—do it yourself. No matter which method you’re choosing, the training basics should begin when your dog is comfortable in his new home. That doesn’t mean as soon as he walks through the front door for the first time. Once he’s had a chance to settle in a bit, sniffs everything that needs to be sniffed, and checks out his new digs, you can start by reinforcing his good behavior. Even the youngest dog will understand praise, especially if it’s in the form of a treat. He goes into his crate on his own? Your lighthearted voice tells him, “What a good boy!” or, “Here’s a treat for going in your crate!” Positive reinforcement is essential to everything that he does well, from relieving himself outside, to finding his water bowl. No matter how small the deed, praise his good efforts.

Whether your Airedale is a puppy or an older dog whom you’ve adopted, your first step in the training process should be to teach him his name. Use it frequently, in a light, positive tone of voice when speaking to him. As soon as he acknowledges you, lavish him with praise or a treat. Repeat the process every chance you get. Familiarity with his name is not only important in the training process, but can also be a matter of safety, especially if you need to get his attention quickly.

Never associate his name with negatives. Ever. If he knocks over his water bowl, it’s much better to address the situation with, “Oh, what happened?” in a disappointed tone of voice, than to angrily scream, “Max! Bad dog! Look what you did!” If your dog seems to be uninterested, or simply doesn’t yet understand the concept, keep his leash attached. If he’s not ready to respond to his name, give a little tug on the leash to bring him to you. Add distractions, bring him into another room, or take him outside for a change of scenery and keep trying. But don’t try so much that your dog is becoming bored. Puppies especially have a very short attention span, so limit the number of repetitions, and try it again later.

Use the same process with older dogs, but here we would advise to use an even gentler tone of voice. If you’ve adopted your Airedale, you may not know what his history involved before he came to his new home. If his owners used his name for punishing a behavior, or association with any sort of abusive treatment, he may be fearful when he hears his name. Praise, treats, rewards for good behavior. A+ for good effort. And a soft, encouraging voice that says, “We love you and you’re safe in our home.”

A note here regarding all that praise and encouragement: Just as you keep your voice calm and relaxed when you’re disappointed, giving a command, or correcting an unwanted behavior, praise should also be offered in a relaxed, quiet manner. There’s no need to respond with a thunderous round of applause or a loud and excited voice. Stay on an even keel, and keep the atmosphere soothing and comfortable for your dog. Show him your approval, praise his behavior, but leave out the bells and whistles, and save the happy dance for later.

Since you’ll be offering treats often, use very small training treats. If your dog loves vegetables, fruit, or cheese, and you’d prefer to use human foods such as these for training, be sure it’s something that is healthy for your dog, and give very small pieces when rewarding his efforts. Occasionally, trainers may recommend that you substitute treats with a favorite toy or some playtime. However, you’ll need to take a break from the training session while your dog plays with that toy. I like to wait until after the session to give a toy as a reward. Small treats provide more immediate gratification.

Along with a supply of training treats (those little bits that you’ll be giving her often), keep some “high value” treats on hand as well. Those are the very special treats that you won’t be offering her on a regular basis for training sessions, but the treats that she will come to learn mean, “You did something REALLY amazing.” Or, “This required a lot more effort on your part and you’ve done a great job.” She’ll get the idea.

If you repeatedly use a specific word or phrase when your dog does something good, along with a treat, he will understand quickly that the word or phrase means he’s done something good. But you can also use the same process when he’s done something that exhibits a negative behavior. Just saying “No” may not be as effective as using a disapproving tone of voice with a phrase such as, “That’s not a good thing,” or just a simple “Uh-oh, I’m not happy.” It won’t come across as quite so harsh, but he’ll understand. If he’s really committed a major felony, you can also give him a time-out, but make it brief. After a minute or so, he’ll have no idea what he’s done that’s brought about your displeasure.

To read more from "The Complete Guide to Airedale Terriers" by Andrea Berman, or purchase on Amazon, visit the link below: