The following is an excerpt from "The Complete Guide to Pit Bulls" by Erin Hotovy. For more information visit the books Amazon Page.

While some Pit Bull enthusiasts might say that Pit Bulls should not mix with other animals, with proper socialization, your Pit Bull doesn’t have to be an only pup in your household. When it comes to different dog breeds, some are compatible with other dogs and some are less so. Pit Bulls are one of those breeds that are not known for being fantastic with other dogs. Still, with the right training and the right household, it’s not impossible to have a Pit Bull that gets along with other family pets.

Puppies are incredibly malleable when it comes to teaching them new behaviors. If they enter into a situation where everyone is acting normal, they are likely to accept whatever is going on around them. If they’re thrown into a situation that’s scary, they might develop aversions. So, if your introduction experiences are calm and positive, then it’s likely that many future interactions between your dog and other dogs will follow in the same pattern.

If possible, try to introduce your dogs in a neutral space before you get to take your dog home for good. These early interactions will tell you if these dogs are compatible. It’s much better to find these things out before all of the paperwork is finalized and your dog is in your home for good.

While some dog experts don’t put much credence in pack mentality in domesticated dogs, others use it to explain why dogs act the way they do around other canines. It seems as though there is no clear answer as to whether dogs behave like their ancestors or not, so it may be helpful to understand why your Pit Bull acts a certain way around other dogs.

Canines are historically pack animals, meaning that they travel with others of their species. Within this pack, it is believed that there are different roles that make up a social order. The leader, or alpha, keeps the other dogs in line and makes the rules. From there, other dogs fall into their place in the social hierarchy. Some dogs will be dominant and whip the other dogs into shape, and some will be submissive and follow the rules.

Even though your dogs are not necessarily in a pack, they may show some of these traits. Some dogs are clearly more dominant than others. These dogs are quick to approach others and initiate play. Some are clearly submissive and may even roll over onto their back when approached by another dog to show that they are not a threat. This doesn’t necessarily mean that one dog is aggressive and the other is anxious. It just means that these dogs have a different role in their “pack.” And these roles can change depending on which dogs are interacting at any period of time.

You may notice that your dogs have a social order in your home. Maybe one dog has to eat before the other one. Or maybe one rolls over and surrenders during playtime. This is not something to be concerned about, as long as neither dog is harming the other. If the dynamic progresses to the point where fights are breaking out, then it’s time to assess their behavior. Otherwise, it’s fine to let your dogs be dogs.

When dogs begin to show aggression toward each other, it is vital for an owner to step in and break up the tension. A dog can do a lot of damage to another, even if it’s generally friendly. Hopefully, you’ll be able to recognize the signs of conflict before a fight occurs. If not, have a plan for breaking up a fight without getting hurt in the process.

Aggression generally comes from fear. Some of these signs include cowering, averting eyes, and tucking the tail between the legs. These fear signals can also be present in submissive dogs that are uncomfortable around others. Be concerned when these non-verbal cues change to ones that signal an impending defense mechanism. Growling, baring teeth, direct eye contact, and raised haunches are all signs that a dog is ready to use their fight response to get out of a scary situation.

If you notice any of these signs, separate the dogs immediately. Placing one in the backyard and keeping one in the house is a good option. This will give each dog a little space to chill out before they inevitably reunite. Or, you can always place dogs in separate rooms or different crates. Make sure your dog cannot readily hear, see, or smell the other one in close proximity. When you bring the dogs back together after this cooling off period, keep a close eye on them, but try to stay relaxed. If you are worried about your dogs fighting again, they’re more likely to be worried about it, too.

If things have progressed too far and the dogs are already fighting, do your best to split it up. Remember, a dog may turn on you, not because they want to hurt you, but because you’re in the way of their fight. In the scuffle, they may not even realize that their owner’s hand is in front of their face. Don’t depend on your dog’s affection for you to keep you safe in a fight. Your dogs may not even realize what they are doing.

There are a number of ways that dog owners break up fights, so you may want to have a couple of methods in the back of your mind if it becomes necessary to use one. One method that seems to work well is to pick a dog up by their hind legs and move them backward like a wheelbarrow. This keeps you out of biting range and allows you to disable the instigator by making it hard for them to fight. When your dog is away from the other, send them somewhere where they cannot come into contact with the other dog. Some owners, especially if they’re without help, will stick some sort of barrier between the dogs, like a large baking sheet. This distraction will break eye contact for a short period of time and will probably startle the dogs as they are physically separated. However, whenever you place yourself between two fighting dogs, you open yourself up to the risk of getting hurt. You might also try the can of rocks method of correction, but if your dogs are locked in, they may not even notice a loud sound.

It’s not unusual for dogs to squabble on rare occasions. Some of these conflicts can be worked out and then never brought up again. It’s hard to know when a dog is going to feel particularly territorial about a toy or a favorite couch. When dogs are constantly fighting or causing serious harm to each other, it’s become a problem. If you are unable to remedy this issue on your own, talk to a trainer or an animal behavioral specialist to help solve the conflict. 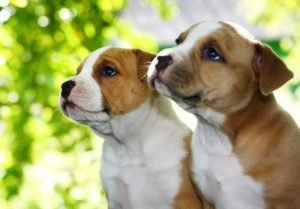 Even more important is the fact that littermates are difficult to raise, period. This is due to a strange phenomenon that some call “littermate syndrome.” Puppies from the same litter often grow up to be codependent to the point where it can cause real trouble for you. When these puppies need to be separated, they freak out and become difficult to work with.

For example, let’s say that one puppy has hurt his foot and you need to take him to the vet. If the dog gets separated from the other, the injured dog might make it very difficult for the vet to look at because he’s panicking due to the separation. Meanwhile, the dog at home is tearing apart your belongings because he’s upset that his brother is gone. Or, you pay lots of money to take both dogs to a training course, but neither dog wants to pay attention and learn important commands because they are distracted by the other. In fact, many trainers will prohibit littermates in their classes because they can be so disruptive to the class.

If you’re in a situation where you’ve taken in littermates, try to keep them separated for short periods of time until they feel more comfortable being apart. Taking each dog for a separate walk may take a lot of time, but it will get your dogs comfortable with the prospect of being separated for a short period of time.

If you’re really interested in having two Pit Bull puppies, consider buying dogs from different litters. Take one dog home and get all of the beginning training out of the way, then buy a second from that same breeder. That way, you’ll have two similar dogs, but without that weird littermate bond that can make raising dogs difficult.

What if My Pets Don’t Get Along?

Maybe you’ve tried everything and your animals are still getting into fights every time you take your eye off of them. Perhaps you’ve even consulted with trainers and vets and you still can’t seem to get everyone to love each other. If things aren’t working out, you might be faced with a difficult decision.

If you haven’t had the new Pit Bull for long, you might talk with the breeder about options for a refund. In serious situations like this, your breeder will want what’s best for the dog. If you got your dog from a shelter or a rescue, they’ll also understand that conflict happens, and they’ll work to find a safe home for the Pit Bull. Or, perhaps you know someone who would make a great Pit Bull owner and does not have any pets in their home. These are all options that will put your pets in a good situation.

Avoid giving up your old pets for a new dog. If the puppy has only been in your home for a few weeks, it won’t make a huge difference if he bounces to another home. A dog that’s been with you for months or years will have a much harder time transitioning to a new home. Also, you don’t want to do nothing and let the dogs continue to fight. If you’re not working toward a solution that is best for every animal involved, this is abusive behavior. There is absolutely no shame in giving up a dog if that means that he will have a better life with another owner. It can be extremely difficult, but it’s best to put your pets’ safety and happiness first.

A full house of amazing pets can be a lot of fun, but it is not without challenges. Dogs can be unpredictable and live by a set of rules that is mind-boggling to humans. In order to make your pack as happy as possible, it’s important to give your pets lots of time to become accustomed to one another. Pit Bulls aren’t always compatible with other animals, so you’ll definitely want to do a few trial runs before bringing your new dog home for good. If you’ve tried everything and you can’t get your pets to get along, there is always someone else out there who will make an excellent owner to a good Pit Bull.

To read more from "The Complete Guide to Pit Bulls" by Erin Hotovy, or purchase on Amazon, visit the link below: