The following is an excerpt from "The Complete Guide to German Shepherds" by David Daigneault. For more information visit the books Amazon Page.

Toilet training, potty training, call it what you will, the goal is to make sure your German Shepherd puppy learns to urinate and defecate in the approved area and that they gradually learn to hold it until the approved spot is available to them. The key to this is understanding that there is a puppy equation you can work with and it sure takes a lot of the guesswork out of the poo process. As the old saying goes, timing is everything, and that is never more applicable than when it comes to a young dog pooping and peeing. Pups can hold things one hour for every month they have been around. When your GSP comes home at eight weeks they are good for two hours, more or less. After that it’s a crap shoot. When those one hundred twenty minutes have elapsed, every additional second is a window of opportunity for your furry rascal. Potty training will be one of the most tedious training tasks you will have to go through with your little home wrecker but when they “get it” and start to let you know that they know, then your sighs of relief will be heard blocks away. Let’s tackle some of the basic methods of making your puppy understand that doing his business is an outside job, not an inside joke.

Remember that crate-training controversy we talked about earlier? Well, I’m going to bring it back for another quick go-round. Using a crate when potty training makes a whole lot of sense, for a couple of reasons.

If you would feel better about using a puppy playpen instead of a crate, it can work very well, especially while your German Shepherd puppy is relatively young. All of the same techniques mentioned for crate-training are applicable to the playpen with less overhead. That’s a little attempt at humor there but my research tells me that depending on the playpen, they are somewhat less expensive than crates.

Leaving the crate concept behind for a minute, let’s examine some of the other things that will help you get ahead of the potty parade. You know that a puppy can only hold her urine and feces for a limited time because of her age. That is underlying principle number one, so let’s build on that. It is never too early to establish routines with your German Shepherd puppy. Combine bodily functions with routine and here’s another equation that will help indicate when your youngster will have to go out to potty. 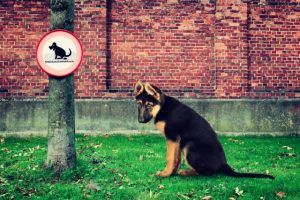 You can take potty practice to the extreme. I know because I was guilty of it with my German Shepherd, Cody. When he was eight and nine weeks old, and because I knew that he could only hold it for a couple of hours at that age, I used to set my alarm throughout the night and get up every two hours to take Cody out. Well, the little puppy would be in a sound sleep, after crying himself into a state of exhaustion, and I would wake him up to stagger outside and stare at the stars. Sometimes he went potty, sometimes he was asleep on his puppy paws. I probably didn’t need to be quite that obsessive. I was being a helicopter parent but I didn’t know any better. I do now and so do you.

Those potty predictors I mentioned are just some of the times to be aware of. You should be spending a fair amount of time observing your GSP; her physical behavior will also give you some clues when it’s time to head for the potty door. If you’re not watching her, accidents will happen and they’re your fault, not your puppy’s mistake. You are the one with the great big human brain with all those neural networks that allow you to anticipate the future. Well, for you, the future is right now and she’s walking around on four feet looking for a place to go potty.

Here’s something else to think about that might just make your life easier and save a few minutes of valuable time. I guess I would describe it as your personal poo command. Pick a phrase that you’ll be able to use anywhere, anytime, without undue embarrassment. It could be as simple as “go potty.” Remember, commands need to be short. Every time you take your German Shepherd puppy out to do his business be ready and poised with your personal poo command. Initially the little guy won’t have a clue as to what it means but every time he pees or poos, you repeat the command. Gradually you introduce the command prior to the dog’s bodily function happening. Eventually, with some persistence, the two of you should be on the same woo-woo wavelength and mission accomplished can take minutes instead of hours. It will cut down on Fritz’s sniffing and stargazing time but he’ll get over it.

Remember our old linoleum floor that I mentioned in Chapter Four? There were a fair amount of potty “accidents” in that room. We used newspaper in the Puppy Room initially to get our eight-week-old to potty in certain areas. Paper training, like every method, has its advocates and its detractors. Cody, obviously a non-believer, initially would pee on the linoleum floor and then go over and tear up the newspaper. That’s not how the paper system is supposed to work. I’ll cover this system briefly because for German Shepherds I don’t believe it should be used except as a brief transition phase to doing business outside. If you have a Jack Russell then perhaps today’s headlines could be more of a help.

The idea of putting newspaper (or puppy pads) down is to get your GSP to potty on the papered area. Then you gradually reduce the covered area, eventually leaving just the paper closest to the door that leads to the outside and then no paper at all. I would use this technique only in the initial stages of training and in emergency circumstances where you are called away and can’t watch your puppy. You will know that leaving a very young dog in a crate for a length of time is NOT something to contemplate. So perhaps, paper it is, at least initially.

While some folks may believe that doggy doors are most suitable for small dogs, German Shepherds can use them as well. When it comes to potty training, they can be a time saver if your house is configured the right way; not only saving time, but if you have to leave your puppy home unmonitored, then if he has been housetrained properly, you won’t have to worry about him messing up. Every time your puppy has to go potty you have been taking him out the same door, right? Each time, the same door, the same routine. Dogs thrive on knowing the rules and understanding what is going to happen. If you have a doggy door, the rule is to take Junior out that way to go potty so that it becomes just the thing you do.

When you are ready to see if your puppy can manage on his own, initially you’ll need to make sure that the inside living space your puppy is confined in is relatively small. You’ll want it all to remind him of Memories of Mama. He won’t want to use his inside space to relieve himself so out he goes through the doggy door. Your outside space will have to be secure so Junior can’t get into any trouble while he’s on a potty run. A doggy door might just open some doors for you in working out the potty puzzle.

One of the unanswered questions of this chapter is, how long is this whole process going to take? How many days, weeks, months am I going to be watching this little genius for signs that she has to go outside to the potty zone? When can I finally get some sleep, when will this be over? To be honest, it’s an open-ended question. GSDs are extremely smart so if it’s taking a long time and you’re wondering why, better haul the old mirror out again. Four months should be an outside ballpark estimate, but many dogs are well on their way to being housetrained before then. With that good news under your belt let’s get ready for the next chapter. It’s all about your German Shepherd and the outside world. They don’t automatically know how to behave in every situation, and they will look to you for cues and clues to what their behavior should be. Let’s call it the social animal chapter.

To read more from "The Complete Guide to German Shepherds" by David Daigneault, or purchase on Amazon, visit the link below: