The following is an excerpt from "The Complete Guide to Chihuahuas" by David Anderson. For more information visit the books Amazon Page.

To look at a Chihuahua, you would probably think that there isn’t much to see. That is certainly true – a healthy, hardy Chihuahua reaches a maximum weight of 6 pounds. But that little body can pack one heck of a personality.

Few breeds have as diverse a range of temperaments and appearances as the Chihuahua. They come in a large variety of colors and patterns, and include both short and long-haired versions of the breed. The one thing that remains constant is that they are so tiny you can carry them in a large purse – and many celebrities have.

Easily the most noticeable aspect of the Chihuahua is its size. Their faces are fairly uniform, despite the wide range in color and fur length. With skinny little legs and enormous, wide eyes, there definitely is no mistaking the Chihuahua for any other breed.

Looking at a Chihuahua, you may think that the head is about one-third to half of the 5 or 6 pounds of the pup. The head is commonly described as rounded, like an apple. Those large eyes seem to take up a majority of the face, and you definitely feel like you won’t get much past your Chihuahua. The only things larger than the eyes are the ears that traditionally stick up like radar dishes, giving the dog a look that makes it seem as though it is on constant high alert. Some Chihuahuas do have ears that flop over, but the majority have the more common straight ears that stand up at attention at every little noise in the home.

Their little bodies look very much like that of a boxer or Great Dane scaled down to a toy size. They can be incredibly muscular, especially since any exercise requires a lot more work on their part to go the same distance as you. Their rapid-paced walking puts speed walkers to shame. The effortless, rapid walk that they do without thinking can give you quite an appreciation for how much they have adapted to become human companions.

Most people imagine the short-haired breed when you say Chihuahua, but there is also a long-haired version. Their bodies are largely the same, but the additional fur makes the long-haired version look a good bit more elegant. The rapid walking makes their hair sway and move in a way reminiscent of the movement of a person’s hair in an open convertible. The fur is also a good bit softer.

Their small stature does have the drawback of making them more fragile than most other dog breeds. Children should never be allowed to roughhouse with a Chihuahua as the dog could be easily hurt. They are much more of a lap dog or prankster than a playmate for young children.

The Chihuahua is a terrier, and often exhibits the temperament of this classification. The fearless individuals of the breed are incredibly vocal – and they are easily in the majority. This is an ideal apartment breed, but you are going to have your work cut out for you in the early days trying to teach your Chihuahua not to bark at everything. This means they will make great alarms, and it will be difficult for anyone to be near your home without your dog letting you know. 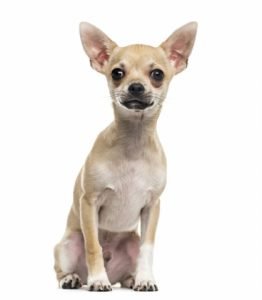 Chihuahuas tend to be either shy or aggressive. They are prone to small-dog syndrome if they are not trained when they are young. It isn’t much better if your Chihuahua goes the other way and ends up being afraid of everything.

The long-haired Chihuahuas do tend to have a friendlier disposition, making them more likely to be relaxed at home. This does not mean they won’t bark often or that they don’t need socialization.

Nearly all Chihuahuas will become incredibly loyal to their family – they love the people and animals in their immediate circle. The breed tends to be wary of strangers, either barking or shivering during introductions to someone new.

They are a decidedly indoor dog, perhaps the most indoor breed of the entire canine kingdom. Most breeders will recommend keeping pee pads or boxes in the home, just like you would with a cat. Unlike other breeds, you can never send your Chihuahua out to do his business and then let the little guy back inside because they are easy prey for predators, including hawks and eagles. This has made the breed far better adapted to staying inside for 23.5 hours out of 24. Even when your dog does go out, you will have to use the leash to protect the little guy. This also explains why they are so protective of their people – they are just returning the favor for your protection of them. Not that they typically realize just how small they are.

Your Chihuahua will probably walk down the street eyeing everyone and everything and analyzing them to determine how much of a threat they are. Barking will very likely come into play even when the two of you aren’t at home, though you can train them to be less vocal on walks if you take some Cheerios with you. It is always entertaining to watch a Chihuahua yapping ferociously at a German Shepherd or Mastiff. Size difference aside, the larger dogs typically look down at the little guy in confusion, or back away, not exactly sure how to react to the small animal. These kinds of encounters will only embolden your Chihuahua, so you will want to train your little puppy to be calmer on walks instead of terrorizing other dogs.

A Distinctive Face and Stature

As mentioned, the head shape of a Chihuahua is incredibly unique. It looks more like the inspiration for an alien head than that of a dog. The large ears help the dog to hear a lot of sounds (though they are not quite as sensitive as working breeds like the Corgi), and they will react. It can be entertaining to just sit and watch your Chihuahua try to take in all of the sounds, their large ears twitching and turning at the slightest noise. It will typically be followed by a bout of yapping and running around, unless you train them not to do that. 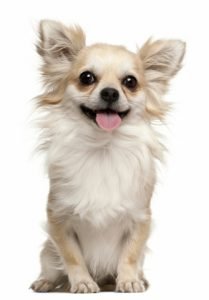 Probably the most noticeable feature is the eyes. They are large and soulful, giving the Chihuahua a look of either sorrow or alertness that is very difficult to ignore. They definitely know how to use that to their advantage as well. When you are eating, those eyes are going to be begging you to share, and you will have to resist.

The Chihuahua is the smallest dog breed in the world, and that is pretty much the best way to sum them up. They are unbelievably small. This means you are going to need to take an entirely different approach to their care than you would with almost any other breed. They are more fragile than most breeds, and some Chihuahuas are also incredibly intelligent. You have to find the right balance to taking care of them without spoiling them, a feat that isn’t as easy as you would imagine.

In addition to their various colors of coats, Chihuahuas have a varied personality range. They can be incredibly fierce, constantly yapping at dogs they encounter on walks. Or they can be shy and skittish, something you need to actively work to remedy as much as possible. It is not healthy for them to be constantly scared and shaking. They can also be extremely friendly and bouncy, acting as the life of the party instead of little terrors or cowards.

Much of their personality is going to depend on how you train and socialize them. Other aspects of their nature will be directly connected to their parents’ temperaments. This is why it is essential to spend a lot of time talking to a breeder if you plan to get a puppy. You want to know what the parents were like so that you will have a much better idea of what kind of temperament your puppy will have. If you rescue a Chihuahua, be prepared for the little guy to take some time to warm up to you before you really get to see the personality. They are wary by nature, and they will be more so when introduced into a new environment.

To read more from "The Complete Guide to Chihuahuas" by David Anderson, or purchase on Amazon, visit the link below: