The following is an excerpt from "The Complete Guide to German Shepherds" by David Daigneault. For more information visit the books Amazon Page.

German Shepherds have been bred to have energy. Lots of it. There is an old joke among GSD owners. The good news is you are the proud owner of a GSD. The bad news is you have to exercise him. Well, it’s not really bad news but you’re going to find that it’s definitely more of a marathon than a sprint. The best way to deal with the insatiable workout demands of your dog is to have a schedule, be faithful to that timetable, and always make sure Thor is tired at the end of the day. Your approach to exercising a German Shepherd puppy will be completely different than dealing with an adult dog so I’ll break things up into two sections. But before we go there, I want to mention something about living in the German Shepherd world. Once you have a GSD and start talking to trainers, and start going onto German Shepherd forums on social media, you’ll find that there are at least two opinions on how to approach everything in GSD World. That also applies to exercising your puppy. There is one school of puppy performance that is extremely conservative, advocating some exercise but nothing extremely structured, letting the puppy expend his energy running around and perhaps playing with some of his puppy peers. The other school of thought says that German Shepherds are bundles of energy, especially puppies, and we should help them expend that energy in order to keep them somewhat civilized. My experience with my own GSD and observing others lands me somewhere in the middle of both camps. Call me a master of moderation.

Your puppy is growing fast. Everything little Thor has is developing at a rapid rate. And that can be a problem. Too much exercise, and the wrong kinds of activity can damage your German Shepherd puppy for life. The reason? Blame it on something called “growth plates.” These are located on the ends of your little dog’s long leg bones and they consist of cartilage that gradually hardens into bone as Thor grows. Overly strenuous exercise, jarring activities like jumping or running down stairs, can damage the growth plates and leave a German Shepherd puppy with deformities like bowed legs or even early development of dysplasia. So, until the plates close and are finished growing (which happens around eighteen months old) only moderate exercise is recommended. I would suggest that no forced exercise be included in your puppy program. Here’s my take on things. 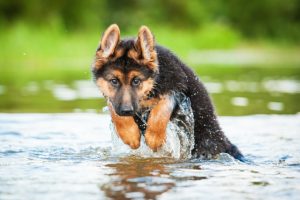 Don’t encourage jumping or leaping games. Definitely no leaping in the air for Frisbees. By this I mean not over and over again. Once in a while is fine. Remember, I said moderation.

Do go on lots of walks. Puppies can stop and sniff at their own pace. You might even lose a few pounds.

Don’t try and turn your puppy into a Stairmaster. Some stair climbing in the course of a day is all right but not as an exercise program.

Do play lots of fetch or whatever version of fetch your puppy can manage. GSPs are ball crazy so you’ll have no trouble engaging them. Getting them to bring the ball back to you and drop it is a whole other issue.

Don’t put a leash on your puppy and take them jogging or cycling. You need to give your dog the opportunity to take natural breaks and rest. Especially stay off hard surfaces such as concrete when exercising your German Shepherd puppy. Turf is king.

Do play games like hide and seek. Some running, some sniffing, some mental concentration, it doesn’t get any better than that. After a few minutes of this I can see puppy’s eyes closing and game time turns into nap time.

Don’t overdo the total amount of exercise. A general guideline that some GSD dog trainers recommend is five minutes of exercise per month of age. So, a four-month-old is good for twenty minutes at a time with you being the judge of how many times a day you exercise Thor.

Do see if they like the water. The earlier a puppy learns to swim the more exercise time can be devoted to the water. As with humans, it’s a very body-friendly exercise for your best friend.

A last word on puppies and exercise. They are enthusiastic participants in every game, every walk, every stick-throwing venture. Most of them don’t know when to stop and they will run until they drop if you allow it. Don’t do that. It’s usually when a puppy has exceeded his limits that he gets into trouble, physically and socially. You should become a master of moderation too.

When your German Shepherd hits the heady days of adulthood, sometime around the eighteen–month mark, Thor’s exercise options and indeed his physical requirements change significantly. He will still be a ball of fire but you are able to structure his exercise time so that in coincides with your exercise time. That can be a real time-saving bonus when you don’t have to schedule for two different workout periods. Before we run too far down that road, I think it’s important to mention a guideline that I religiously adhere to. 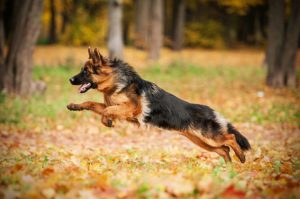 Now that you have an adult GSD you can start testing her limits and making sure that when every day comes to an end you have a tired dog on your hands.

That last point about mental stimulation leads me to the more thoughtful part of this chapter. Your German Shepherd can be made as fatigued by mental stimulation as any hike on a mountain trail. If you can get to an off-leash area, and you have good recall, just let your GSD wander and sniff. Her senses will be so preoccupied that you won’t even realize how tired Mischa is until she falls asleep before dinner. Coming up with ideas to challenge your GSD is where your own creativity can really shine.

We have a large plastic barrel in our backyard. I alternately put Cody’s Frisbee on top of the upside-down barrel, in the upright container, and under the overturned barrel. I make Cody sit about fifty yards away each time, then release him to run to the barrel and retrieve his toy, sometimes by standing on his hind legs to put the bite on the Frisbee on the top or sometimes having to push the barrel over to get the Frisbee. He is content to go lie down for a few minutes after a ten-minute workout of barrel Frisbee.

Now much of your German Shepherd’s mental stimulation is going to come from the training that you and your dog spend time on. Coincidentally, that’s where we’re going in the next chapter that I like to call “Who’s Training Who?”

To read more from "The Complete Guide to German Shepherds" by David Daigneault, or purchase on Amazon, visit the link below: